Turntables are devices used to play sound recordings; it is a kind of circular rotating platform. But, people wonder and desire to know how does a turntable work? So, here’s a simple guide to explain the working style of turntables.

The best turntables are also sometimes considered phonographs. Turntables have amazingly maintained their popularity among people. With proceeding time, technologies are evolving, many digital recordings and technologies are present but turntables hold their ground strongly, it is so because playing Vinyl records on turntables has a smooth and warm sound listening experience for people. 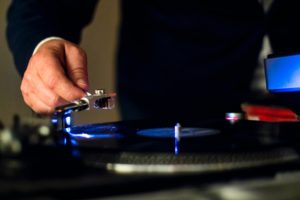 Most popularly, Turntables are used by DJs to spin around the music waves and even it is hugely that using turntables the music keeps changing and refreshing audience interactions.

These turntables are also used as treasure boxes as they are used to run the recordings, which music enthusiasts keep records very carefully for future music sessions.

How does a turntable work?

When turntables turn using a direct drive or belt drive motor, it turns the platter which is holding the record at that time of playing, then the tonearm present in the structure of the turntable that is carrying the headshell along with matched cartridge makes the sound contact with the record.

Now, on observation of the record plates, there are rings kind of linen surface present, and these linen grooves are pressed into its surface during its creation, which the stylus, commonly known as needle, reads each wiggle and bump and translates into sound waves, that gets rolled via preamp and played out on the speakers.

This way music is being heard after the inside music processing in the turntables mechanism.

The records are prepared through a very well-defined mechanism taking meticulous vigilance, that is, when music discs are recorded, the sound wave vibrations are captivated in the utmost detailed way so that they can be further replayed, this process is called cutting of records. The speed at which the music is cut is the speed at which further records are played. Commonly, most records are either 33.5 rpm or 45 rpm; here rpm stands for rotation per minute.

There are direct-drive and Belt driven, types of motor in the turntable. Direct drives are a kind of motor which allows manual control of the turn speed of the record. The more common belt drive is defined to be a set of two drums, which with an elastic band is turned between them to turn the platter.

How does a Bluetooth turntable work?

A Bluetooth turntable provides a turntable working procedure along with connectivity with a stereo, powered speakers, or headphones wirelessly.

Bluetooth facilitates playing the music or sound list easily even at a faraway distance of up to 30ft, also through a wireless connection.

The working procedure of Bluetooth turntable revolves around the requirement of powered speakers or stereo receiver or headphones with Bluetooth facility and connect it to turntables, after connecting it begin to work that implies an individual can play music from distance also. 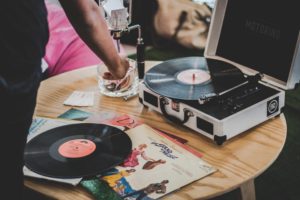 How does a DJ turntable work?

A DJ turntablist uses a turntable to create various sound effects such as rhythmic accompaniments, percussion breaks, beat loops, recombining two individual sounds, etc., thus, most DJs prefer Direct drive in turntables, which is a type of motor, it enables manual control of the turn speed so that DJ controller can form sound effects through grabbing the record for scratching then gets up to speed quickly, sometimes they reverse the slip pad to produce scratchy effects and many other different types of sound effects while playing music.